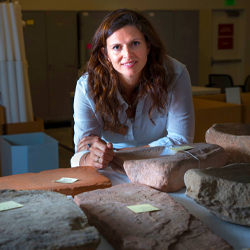 Complementary archaeological and paleoenvironmental datasets from North Creek Shelter (Colorado Plateau, Utah, USA) are analyzed using the diet breadth model, revealing human dietary patterns during the early and middle Holocene. Abundance indices are derived from botanical and faunal datasets and, along with stone tools, are used to test the prediction that increasing aridity caused the decline of high-return resources. This prediction appears valid with respect to botanical resources, given that high-ranked plants drop out of the diet after 9800 cal BP and are replaced with low-ranked, small seeds. The prediction is not met, however, with respect to faunal resources: high-ranked artiodactyls are consistently abundant in the diet. The effects of climate change on dietary choices are also examined. Findings show that increased aridity coincides with greater use of small seeds and ground stone tools but not with increases in low-ranked fauna, such as leporids. The patterns observed from the North Creek Shelter botanical and faunal datasets may reflect different foraging strategies between men and women. This would explain why low-ranked plant resources became increasingly abundant in the diet without a corresponding decrease in abundance of high-ranked artiodactyls. If so, then archaeological records with similar datasets should be reexamined with this perspective.